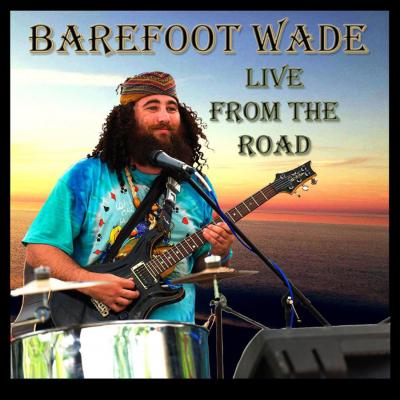 “Live From the Road” by Barefoot Wade features two discs that detail the life, adventures, and musical sagas of a modern beach town bard, equipped with guitar and steel drums.

Barefoot Wade McVey has an engaging laugh, a sort of unique cackle that has been known to pierce the moon on the right occasion, and this sort of laughter couples with his natural sense of gregariousness, making him a figure of note wherever he goes. This is true whether he is performing, or sharing a bonfire with the denizens of the night, or traveling down the road to his next stop in life or his next gig, whichever comes first. Whatever your impression might be of Barefoot Wade McVey, he will definitely be one of the more interesting, unique people that you may meet in this world, and this singularity, this uniqueness is definitely embodied in the songs that he writes. I have seen Barefoot Wade perform countless times over the last 10 years, and have always been impressed with his sense of presentation, his willingness to sing and play for anyone who cares to listen, for his hilarious perspectives that he puts to song. It was with pleasure that I received his new album, a two-disc set called "Live From the Road."

The album begins with "Off Season Jam," a track that Barefoot Wade dedicates to all the seasonal beach workers in tourist towns, who "work really hard, and party even harder." The buoyant track is characterized by wistful guitar and steel drums as he details a community where the "tourists will be leaving soon" and needing to find a "plan" until Easter Sunday, when tourist season starts again fresh. Wade's guitar work shines in this track, as does his charisma and sense of storytelling. The track seamlessly meshes into the understated elegance of "The Garden" which spotlights more of McVey's work on steel drums, coupled with a looping ukulele and finishes with a flourish of confident guitar. "Cosmic Synchronicities" begins with steel drums and offers a sense of determination and optimism that "something good has got to be around the bend" even though one needs "to find better rhymes because everything is starting to sound the same." This sort of hard-earned wisdom and a sense of inner reflection are prevalent throughout the tracks of this album, as Barefoot Wade, a modern bard with guitar, reflects on his perspectives from a life on the road, and the knowledge that he has gained along the way. "Wake Up" proves lovely, with wistful guitar and steel drums and lyrics that remind us that "cause every day on this earth is a cause for Thanksgiving." The next track is "Seasonally Mine," an ode to summer love in North Carolina beach island of Ocracoke, which Barefoot Wade describes as a "two and a half hour ferry ride to Paradise." He sings of days spent in Ocracoke bar-hopping and skinny dipping until an alligator shows up and "ruins our date." The first disc closes with an instrumental called "The Sombrero of Knowledge." In introducing this track, Barefoot Wade offers that naming "instrumentals" is one of the coolest things about them, and he seems to get a certain chuckle out of the name of this particular track as he introduces it. The track is light and jaunty, filled with nice layers of guitar and characterized by excellent work on steel drums and closes the first half of the album in robust fashion. The track coalesces around a yearning, guitar solo, proving McVey to be quite the skilled guitarist, on top of his all-around excellent performance skills.

The second disc begins with "Ring," a complicated love story of a love interest who sports a ring given by another man, and the sort of grim acceptance that our "hero" takes in looking at her wearing this ring. He recounts their time spent together, how he wanted to be with her, but how his love was not reciprocated in the same fashion. McVey's guitar shines in this track as it skitters over and around a tale of modern love, a tale that might even be called modern heart break. The album has several interestingly named tracks and "Cell Phones are the Spawn of Satan" surely deserves mention in this regard; as McVey introduces the track, he relates a prior life goal of being the "last person" to ever get a cell phone and a computer; in this track, he equates computers to "Communist bastards" and sings how he is not a "high-tech guy," but instead a person that likes to "stick to his roots." McVey takes a disarming approach, offering kernels of wisdom from the life of Barefoot Wade and setting them to song, and the results are humorous, uplifting, and even fun to dance to. In "Strawberry Ice Cream Bubbles," McVey relates a story of being broken down in a rental van and composing a song on the side of the highway. The track features excellent guitar, McVey's signature story telling style, and a sense of light-heartedness and joy. The album closes with "In and Out of Paradise," a track featuring robust guitar and more of McVey's playfulness and sun-soaked wisdom. As the track washes away, McVey offers, "if you came here on vacation, try not to leave on probation... Indeed."

The two discs of "Live From the Road" offer a charming look at what a Barefoot Wade performance is like, complete with playful banter between songs, songs about love and heartbreak, songs of social connection and understanding, and tracks that are characterized by strong work on guitar, steel drums and even a smattering of ukulele thrown into the mix. Barefoot Wade, as this modern day bard with guitar, proves both charismatic and disarming in his approach as he banters and laughs with his audience between tracks. Throughout all the tracks on this album, there is definitely a hard-earned wisdom at play and an appreciation for the smaller things in life. McVey finds joy in his history, in years of beach combing bar gigs, in years of interacting with friends up and down the coasts of America and even the Caribbean. The resulting collection of tracks on this album offer this same sort of joy, which may be understated at times, or matter of fact at others. There is definitely an appreciation for Life here in the tracks of "Live From the Road" and Barefoot Wade proves to be an excellent tour guide along the way. 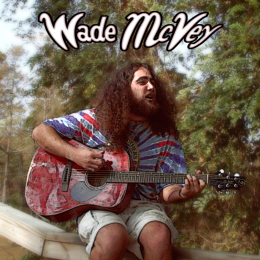 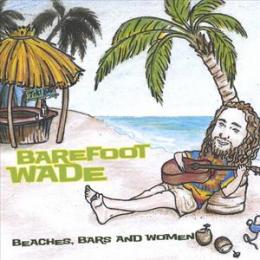 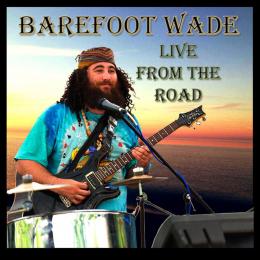