Grace Potter & the Nocturnals - This is Somewhere CD 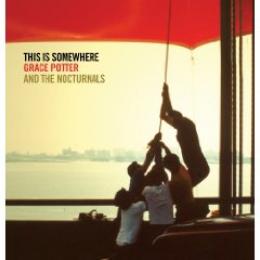 $12.98
Grace Potter and the Nocturnals are impacting audiences with timeless, original music. Their creative blend of roots, funky blues, gospel, and rock conjures up a nostalgic sound most likely found in a record collection from the sixties and early seventies. The band is led by twenty-two year old phenom Grace Potter, whose vocal ability has drawn comparisons to legends like Bonnie Raitt, Norah Jones, and Janis Joplin. Her unique style behind the Hammond B-3 and piano is captivating audiences across the country. Joining Potter are Scott Tournet (guitar/slide guitar), Matthew Burr (drums/percussion), and Bryan Dondero (upright/electric bass).

This Is Somewhere (Ragged Company/ Hollywood Records) marks the coming of age of the young, Vermont-based rock band Grace Potter and the Nocturnals. To say that this album makes good on the band's immense promise would be an understatement. While these assertions quite naturally invite skepticism, we respond: "just insert and press 'play'."

The album manifests incredible growth in the writing and singing of 24-year-old phenomenon Grace Potter, who has clearly found her true voice in both respects, as well as the instrumental prowess of the band: Potter on the Hammond B3, guitarist Scott Tournet, bassist Bryan Dondero and drummer Matt Burr. On this remarkable record, they make a glorious racket indeed.

The band's timeless, organic brand of American rock & roll is fully in evidence throughout This Is Somewhere. Potter's timely and eloquent songs--some of them intensely personal, others politically charged--immediately lodge themselves in the listener's head (pretty much defining the de rigueur term "sticky") and bore in deeper with each successive play.

This band has something else going for it -- Potter's innate star quality. As critic Jeff Davidson wrote last September in a piece posted on TMZ.com, "...she is easily the most glamorous star to rise from the jam scene, and her million-dollar smile makes her as desirable as any pop songstress. The fact that she's amazingly talented...makes her even sexier."

Potter and the Nocturnals grew from the roots of rock & roll in what some might call the old-fashioned way; For the first two years, Potter and the band teamed up with friends to run their "Ragged Company" label from her dad's old sign shop, handling everything from CD graphics to booking the tours. In 2005 they joined forces with indie911 founder Justin Goldberg after reading his music industry book suggesting new artists should tour instead of look for record deals. The group turned down their first label offer and chose instead to sign on with booking agent Hank Sacks, now with Monterey Peninsula Artists, and began playing a countless number of music festivals and opening slots until gradually building great word of mouth. Their sound? They're a neoclassic rock & roll band possessing bona fide chops, a natural sense of dynamics and a palate containing all the useful colors, and these qualities allow them to stretch out onstage, to riveting effect. Perhaps their greatest asset is the ability to transcend genres, never content to settle into one predefined sound. GPN were once the up-and-coming darlings of the modern jazz and blues scene, receiving incessant comparisons to Norah Jones and Lucinda Williams. Yet their magnetic live shows and dedication to the road earned the band a warm welcoming from the jam-band community, leading to two nominations at the 2006 Jammy's. At the same time, This is Somewhere is a testament to the band's true roots - pure rock music. The influence of predecessors The Band, The Rolling Stones, and Little Feat is clear. Still, GPN's raw passion and uncompromising politics more directly evoke the memory of the great Neil Young & Crazy Horse, whose Everybody Knows This Is Nowhere served as one of the inspirations for the album title.

Following those two years of virtually nonstop roadwork on a national scale sharing the stages with such legends as Taj Mahal and Mavis Staples, including a bravura performance at last year's Bonnaroo Music Festival ("Touring is a big part of who we are," says Grace), the band has upped the ante considerably on the aptly titled This Is Somewhere. The sessions were conducted in a Los Angeles studio with song-centric producer Mike Daly, who has forged a booming career for himself after coming on the radar as Whiskeytown's resident multi-instrumentalist; A-list engineer Joe Chicarelli, who joined the project between his co-production of the Shins' Wincing the Night Away and setting up a Nashville studio for the White Stripes album project; and mix master Michael Brauer, whose credits span from Coldplay's Parachutes to My Morning Jacket's Acoustic Citousca.

And just like that, this surprising and deeply resonant album lifts Potter and the Nocturnals into the rarefied stratum presently occupied by Wilco and My Morning Jacket--bands that combine a reverence for rock's rich heritage with a sense of adventure and a need to express something honest and heartfelt. We can't have too many of those, can we? Welcome to the club, kids.
Genres:
Blues
Funk
Rock
Roots 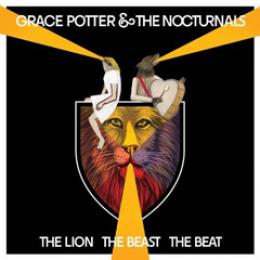 Grace Potter & the Nocturnals - The Lion The Beast The Beat CD
$13.98
Add to cart 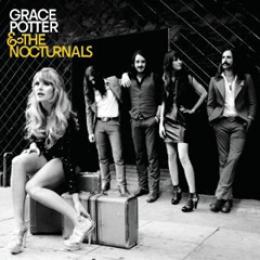